The latest St. Luke’s news and information related to coronavirus and COVID-19.

Luis Laurel, a guest services specialist in Boise, was among those who staffed testing tents during the first weeks of the COVID-19 pandemic.
By Dave Southorn, News and Community
March 9, 2021

The streets, usually teeming with tourists and powder hounds between runs on the slopes, were empty.

It was an eerie sight for Yolanda Arriaga Franco, a registered nurse at St. Luke’s Wood River Medical Center.

As she drove from her home in Carey into Ketchum last March, signs welcomed the arrival of people like her, combating COVID-19 as it first hit the United States. The area she called home was one of the first, very tangible, hotspots in the nation.

“I kept thinking, ‘This must be how it feels when people are going to war,’” Arriaga Franco said.

The human toll has been comparable. As of March 7, nearly 1,900 Idahoans had died from COVID-19 and more than 500,000 have died across the country, more than many of the country’s most devastating wars combined. Hundreds of thousands have fallen ill. And, just as with conventional wars, the health damage for some survivors is likely to linger for years, quite possibly for decades.

None of that could have been known a year ago, during those uncertain, terrifying early days of the pandemic. Saturday, March 13, marks one year since the first confirmed positive case in the state, but it had been circulating before that, some in the Wood River Valley calling it the “Ketchum crud.” A week after that first positive case, the St. Luke’s hospital there suspended normal operations, leaving just the emergency department operating as usual.

Reading up, getting ready

Providers had tried to read up all they could on the novel coronavirus from the few studies put together overseas as it ravaged China and Italy. In the Wood River Valley, with its ski areas drawing international visitors, training was already a regular occurrence; team members knew to be vigilant for Ebola and other tropical diseases.

The early focus was on cleaning; scientists and infectious disease experts were as yet unaware of the virus’ effectiveness at airborne transmission, and there was hope COVID-19 would ease up with the change of seasons.

“We didn’t know what we didn’t know, and that’s a terrible position to be in,” said Dr. Jim Souza, St. Luke’s Health System chief physician executive.

The Wood River Valley, as is true of other Idaho communities, is close-knit. Residents spend time together on the lifts, in the restaurants, at the grocery store. They are also in close physical proximity to many visitors in the winter months. So when it hit Wood River, it hit hard.

Two emergency room physicians tested positive. A handful of others had to quarantine because of possible exposure. Testing resources were scant, and often took more than a week to come back with a result.

“It didn’t take too long for it to take out quite a few of our employees, and because we didn’t know a lot about it, they had to stay home … they were scared,” said Angela Brady, nurse manager at St. Luke’s Wood River. “The emotions were running high from the fear of the unknown.”

Those who lived and worked through those days recall the fear.

“I would keep the clothes I wore to work in the garage,” Arriaga Franco said. “Some nights I didn’t kiss my kids goodnight or get close to my husband. I was so scared.”

‘What blew me away was the pace …’

At the time, Wood River had one ventilator. Blaine County has approximately 22,000 residents. St. Luke’s Wood River, the local hospital for many rural residents scattered among multiple communities, was not designed to treat a large surge of patients potentially carrying a highly contagious and deadly virus.

As physicians, nurses and other team members fell ill, those left to staff the hospital came under increasing strain.

“What blew me away was the pace, how quickly it spread,” Dr. Souza said.

“Things started to get out of control. We had to shut it down because we just had to get organized. We needed to be able to know we could provide safe care.”

Patients were primarily transferred to St. Luke’s Magic Valley, with some going to Boise. The all-hands feeling began to ripple outward, with nurses, physicians and respiratory therapists coming to assist from other areas.

“If we were an isolated, rural hospital, we would be crippled right now, because we have so many people who are out with the illness,” said Dr. Brent Russell, a Wood River emergency physician who had COVID-19, in a March 26, 2020, interview with Boise Public Radio.

A handful of patients were transferred each day following the closure, which may not sound like a lot, but with limited ambulances available, along with the time it takes to transport, it adds up. Ideas were changed on how the ambulances were staffed, or even if two COVID-positive patients could be transported together.

"That number is extraordinary when you consider the nearest facility is 80 miles away," Dr. Deb Robertson said. "We were lucky to be part of a larger system, which allowed us to get the level of support we needed for the first time."

At the same time, it was that team mentality and approach which in those scary early days, as difficult as they were, kept the situation from becoming overwhelming.

Near the beginning of 2020, the St. Luke’s supply chain team had begun gathering as much personal protective equipment (PPE) as possible. The work group got creative, going so far as to consider the tattoo and other industries as sources of potentially needed supplies to make sure team members did not run low.

Many patients who came in complaining of abdominal pains would test positive for the novel coronavirus, and even though it wasn’t recognized as a symptom at the time, a notice was sent around the system for team members to be on the lookout for it. Additional PPE carts were placed for use.

Nursing staff braved the weather in pop-up testing tents to see sick, scared people in their vehicles. And team members did all of it as their own family members and many friends continued to fall ill. Tragically, many loved members of the community died of the virus.

“We had to think on the fly,” Brady said. “… the team came together in an amazing way. We put our heads together to solve the problem the best we could.

“Our true colors came out, and they were amazing colors.”

“Talk about building the plane as it’s being flown,” Dr. Frank Batcha said.

It could have been much worse, the team and residents of the community know, but teamwork from all corners helped hold it together – and made sure the team, the hospital and the community came roaring back.

The beginning of the pandemic informed how the organization could handle a once-in-a-century event. The first confirmed COVID-19 deaths came late in March, as did Idaho’s stay-at-home order which lasted a little more than a month. That gave leaders time to further prepare for what was to come.

“We started to know what we didn’t know,” Souza said. 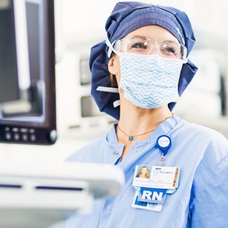