St. Luke’s Pam Springer: The heart of a nurse shines in the throes of loss

Pam Springer has been St. Luke's director of clinical learning for nearly eight years and has served as interim chief nursing officer since January.
By Dave Southorn, News and Community
May 10, 2021

Ask anyone at St. Luke’s about Pam Springer, and one word is bound to come up.

“She has this passion to do the right thing,” said Cy Gearhard, who recently retired as St. Luke’s chief nursing officer.

“She’s always been the ultimate patient advocate and ultimate advocate for nursing.”

Springer has served as interim CNO since Gearhard’s retirement. St. Luke’s is celebrating the nursing team for its extraordinary work as the country marks National Nurses Week and National Hospital Week.

That passion Springer brings is particularly remarkable, given her experience last year. It helped her get through the most difficult times of her life – and against daunting odds, reinforced her love for the job.

A registered nurse who began her career in critical care units, Springer has been drawn to education, working for 24 years at Boise State. She served there as associate dean of the College of Health Sciences and director of the School of Nursing before joining St. Luke’s as director of clinical learning services in 2013.

She saw, up close, the determination of the St. Luke’s nursing staff she had spent years training when COVID-19 hit Idaho.

And then it hit home.

In late March of 2020, Springer and her husband, Dennis Redfern, both began to feel ill. Dennis’ breathing became labored, and he tested positive for the novel coronavirus.

Springer’s symptoms were not quite the same – her oxygen levels were not as low – but she had gastrointestinal symptoms that soon were recognized as one of the many signs of COVID-19. Both went to the emergency department.

Redfern was admitted to the hospital and Springer was sent home, since she didn’t meet the respiratory criteria.

“I could barely get out of bed,” she recalled. “I had a 103-degree fever for almost two weeks, could barely eat or drink, but we just didn’t know that much about COVID at that point.”

At home, sick and worried, Springer kept in touch with her St. Luke’s team, and Gearhard grew increasingly concerned for her friend and longtime colleague.

“Pam was so sick, she didn’t know what to do,” Gearhard said. “It was pretty clear she needed to get to the hospital. I told her to call 911.

“She was trying to do what she thought was best, but you see people talk themselves out of heart attacks or major events. It was like that.”

Springer was admitted a few days after the trip to the emergency department.

“I wouldn’t be alive today if it wasn’t for Cy,” she said. “That woman called me every day and she insisted I go the hospital.”

Pam had already seen her husband alive for the last time.

On April 7, 2020, Dennis died of COVID-19 complications. He was among the first 20 people in Idaho to die as the result of the virus.

“It was so hard, because I was always a nurse for my family, always by their bedside, but I couldn’t do that,” Springer said.

“They intubated him and I had to make the decision to take him off the ventilator while I was still admitted.”

Springer spent a week in the hospital and gained deeper appreciation for those she works with. She saw them repeatedly don and doff layers of personal protective equipment, the time they put in and the toll it took.

At times, she was cautious in using her call button so as to not inconvenience team members.

“I saw how hard it was on them,” Springer said. “They were so caring, even though you knew it was killing them.”

After losing her husband of 40 years, Springer was left wondering how to move forward. He couldn’t even have a standard funeral. All Springer had was a photo of his casket being wheeled into the cemetery.

In her most difficult times, Springer found comfort in those closest to her.

Her niece, Jennifer, had lost her husband to ALS on Christmas Day 2019. She helped Springer bury Dennis and moved in with Springer after his death. Together, they take care of Springer’s five acres, which includes some cows. Jennifer oversees the house, while Springer tends to the animals and the land; she has become an expert in sprinkler repair in the process.

“It’s been such a blessing – she’s been a lifesaver for me,” Springer said. “This last year has taught me the world is full of so many wonderful people.

“I’ve survived because of the kindness of people, truly.”

Though she says it felt like longer, Springer took only six weeks away from her job after Dennis’ death, eager to get back to her passion. No one would have blamed her if she did not want to come back, but she did.

Springer not only got back to work, she took on even more responsibilities as Gearhard moved toward retirement. And processes she implemented years ago, to embrace learning through simulation, have paid dividends during the pandemic, when face-to-face clinical learning has not been possible.

“She went through such a tragedy, but she is so gutsy, so courageous,” Gearhard said.

“She may say nice things about me, but I’m indebted to her for her willingness to step up.”

It wasn’t until last month that Springer was able to hold a proper memorial for Dennis. It was a therapeutic moment in a difficult period of time, and provided another reminder for her to continue to do what she does best. As St. Luke’s readies for a new nursing executive to join the organization this summer, Springer is looking forward to resuming work among her teaching and training colleagues.

“I saw her recently for a philanthropic project we’re working on, and I’ve never seen her look better,” Gearhard said. “She’s amazing.

“Look where she was a year ago, the struggles she went through, and see where she is now. She’s ready to start a new journey.”

As the world – and health care within it – resume some semblance of normal, Springer likewise is picking up the threads of her life and in her own way, honoring Dennis.

The pair loved to travel, and Springer intends to continue to take in wonderful sights. She and Jennifer recently purchased a 40-foot fifth-wheel camper. A helpful neighbor who had experience as a truck driver showed them how to properly drive it.

A drive up to Cascade on the always-tricky Highway 55 went smoothly, and they have plans this summer to visit the Pacific Coast. 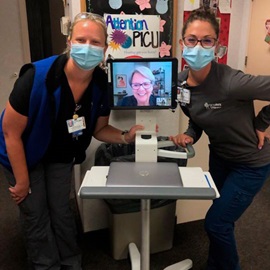