One year in, St. Luke's Lifestyle Medicine has plenty of success stories to share

A year ago, Gale Babin knew he needed to make some changes to his lifestyle.

Babin became aware of this after seeing his orthopedic physician because he was suffering from severe end-stage osteoarthritis in both of his knees. But before his physician, Dr. Ronald Kristensen, would operate on those knees he insisted that Babin needed to lose weight and improve his overall health.

Kristensen referred Babin to St. Luke’s Lifestyle Medicine, which opened in the fall of 2019 at the South Meridian YMCA.

“I had hoped to lose weight, and I did,” Babin said. “I lost about 50 pounds. I didn’t know anything about their plant-based diet … and I didn’t totally follow that. But I ate more fruits and salads and quit drinking beer.

“I studied up on it, and just kind of went out and did my own thing. That’s what worked for me. … It’s what each individual wants to do.”

Dr. Jennifer Shalz, the medical director of Lifestyle Medicine, said hearing success stories such as Babin’s validates the existence of the program.

Shalz said the program might be just over a year old, but it had been years in the making prior to becoming a reality. While serving in her role as medical director of St. Luke’s Heart Health and Rehabilitation, Shalz oversaw programs that focused on prevention.

A leap of faith

“We knew from the literature, and instinctively, that we shouldn’t wait until people have their first heart attack to offer them advice on how to improve their health behaviors,” Dr. Shalz said.

But because the clinic was entering some new territory, Dr. Shalz said it took a bit of a leap of faith on the part of St. Luke’s administration to commit to it.

In the past year, the clinic has offered:

Lifestyle Medicine is also taking its message directly to the community. On Feb. 7, for instance, the St. Luke’s team had a chance to speak to about 900 people at the Idaho College of Osteopathic Medicine in Meridian.

Dr. Shalz was the evening’s emcee and Dr. Hans Diehl, the international expert who developed the Complete Health Improvement Program (CHIP), offered opening remarks at the event featuring Dr. Michael Greger, author of the best-selling book, “How Not to Die.” The St. Luke’s team, which included representatives from the Food and Nutrition Services team, shared information about the life-changing programs available through St. Luke’s, such as the CHIP classes.

“The large number of people who came to listen to Dr. Greger demonstrated what we already knew: there is a growing demand from our patients and community for evidence based, expertly delivered education, tools, and programs to help them take control of their health and live their best life,” Dr. Shalz said.

The event was so popular, they had to turn away people once available space was filled.

Dr. Shalz said she and her staff members have had to be creative in finding a way to make the clinic work, both logistically and financially.

“We’re still trying to figure ourselves out,” she said.

But while they are doing so, they are also producing results from grateful patients.

Aldeena Clark was referred to the clinic because her health had been declining for years.

“I had a whole bunch of health issues, diabetes, liver problems, vitamin deficiency,” Clark said. “But my experience here was a life-saver, really.”

Clark said it took a combination of exercise, classes and counseling to help her understand how to improve her health.

“For me, it was about the emotional side of it,” Clark said. “A lot of the problem for me was stress from my job. … I feel so much better, and I feel better than I’ve felt in years. I have my energy back and I’ve lost some weight.

“Healthwise, I’m just different, and mentally I’m so different. I’m able to look at things and not get bogged down. It all works together.”

Like Babin, Clark created her own path at the clinic by taking advantage of the staff and services that most applied to her.

“I think one thing that has helped my progress is the staff doesn’t just know you by a chart,” Clark said. “They know the individual and they remember your history and what has worked. And that’s from the nurses to Dr. Shalz to the people here in the gym, the trainers.”

Back on his feet

Jeff Wagner, the clinical supervisor at the Department of Lifestyle Medicine, worked with Babin as he prepared for his knee surgeries.

“He really owned it,” Wagner said. “He would come at least three times a week to exercise on his own. He was just one of those guys that needed the nudge in the right direction and then he really shined. We know that if we can nudge people in the right direction and give them some tools, that people will see some results and hopefully have that buy-in that can make this sustainable.”

“In about a year I ought to be tap dancing,” Babin said. “Really, I just want to get back to the point where I can go fishing.”

Because of the assistance he received at the Department of Lifestyle Medicine and his own desire and commitment, that goal is attainable for Babin.

It’s success stories like Babin’s that illustrate to Dr. Shalz that the clinic is making a difference.

“It’s so fulfilling … and it’s super-exciting.” 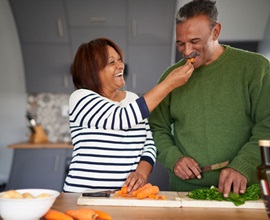 Good choices are at the center of lifestyle medicine, a specialty focused on preventing, treating, managing or even reversing many chronic diseases.
6
Providers
3
Locations