St. Luke’s CFO Jeff Taylor on what adds up to a legacy – and it’s pretty simple math

Jeff Taylor in his workshop.
By Roya Camp, News and Community
May 24, 2022

Jeff Taylor would be the first to admit that he is where he is – and St. Luke’s is where it is – because of relationships.

Taylor, the health system’s third-ever chief financial officer, will retire in a few months after more than 28 years with the organization. He has created a giant pile of projects in anticipation of the change; that work will go on for years.

In many ways, it will be a return to his life about four decades ago, when he worked construction and concluded that he wasn’t cut out for a life of public accounting. Which was unfortunate, since that was what he’d studied to do.

Taylor and his family are part of the fabric of Idaho life and culture and have been for decades. He only recently got around to telling Saint Alphonsus Health System President and CEO Odette Bolano that he was born at Saint Al’s – until he looked at his birth certificate, he’d believed he was a St. Luke’s baby.

He graduated from Meridian High School and the College of Idaho; he has stayed involved with his alma mater, often in board and leadership roles. In recent years with his family, he has done much of the work to turn a bit of a five-acre property near the Boise River in Eagle into a sleek, light-filled and airy home, built to showcase the colorful multimedia art his wife, Christal, creates and to maximize the interplay of nature and water with the structure, installing irrigation, schlepping sand to build a beach on the shore of a small lake and laying sod. He golfs with his father; his parents are neighbors.

What he has helped construct within St. Luke’s and the state is much larger. He and a handful of St. Luke’s and other leaders have laid the foundation of civic businesses and organizations that cradle the hundreds of thousands of residents of and visitors to the area in ways that are nearly invisible and yet indispensable. In recent years, there has been a somewhat demographically predictable wave of retirements of these leaders, from, among other institutions, Simplot, the Treasure Valley YMCA, Idaho Power and St. Luke’s itself.

Taylor intends to leave the organization this fall. Christal Taylor has pointed out the challenge to this, that St. Luke’s is like a merry-go-round and it’s hard to know when to disembark. Previous leaders have found this to be true; many of them have returned for additional tours of duty.

“It’s been a struggle to say when’s the right time to leave,” he told other leaders recently. “You just have to jump off at some point.

Particularly in recent years, Taylor has been focused on a pressing question in health care: How do you continue to deliver great care for people that is accessible and affordable for all concerned?

The challenge has been around for decades; the term in health care now for this puzzle is value. Put another way, the question is: How do all participants get value out of the health care transaction?

Taylor, working from a position of decades of relationships across the state and beyond, and his team have methodically built structures meant over time to crack that nut.

“Jeff’s been more than a traditional CFO. He’s been leading our journey,” St. Luke’s President and CEO Chris Roth said during a recent meeting where Taylor talked about his decision.

“Jeff was at the leading edge of moving us to a value-based strategy. It’s big shoes to fill, for sure.”

Before the pandemic more than proved the merits of the strategy, Taylor and others had spent years building out a network of employed and affiliated medical professionals and tracking costs in ways not historically done in health care. At the same time, they’ve gone further, by building out the bricks and mortar and the tech infrastructure that can begin to make a dent in the need.

“Jeff’s kind of a unicorn,” Roth told St. Luke’s leaders earlier this year. “We are way, way ahead, of many, many organizations … It’s hard to find another unicorn when you have one.”

He didn’t start as a unicorn. He went straight from construction to finishing at C of I, taking the CPA exam and carrying a briefcase for Ernst & Whinney, now Ernst & Young, in 1982. At which point, he had second thoughts; about a month in, he told Christal public accounting was not for him. He missed being outside.

“I didn’t know if I was going to make it,” he told St. Luke’s leaders recently. “I wasn’t very good at the detail, but I was good at other things.”

He was first on the St. Luke’s campus – there was only one at the time, in 1982 – when the organization was an Ernst & Whinney client. He recalls a tiny organization; roughly 25 people were the finance, information technology and human resources teams for the health system, working from a converted house near the current location of the Boise downtown St. Luke’s Cancer Institute. There was one mainframe computer; you fed it with punch cards.

Despite his reservations, and based largely on the relationships he built with and among clients – he cites Albertsons, Simplot, Blue Cross and the entity that is now WinCo as examples of the quality institutions and leadership he has worked with in various capacities over the years – he moved up through the accounting firm, then was recruited by Deloitte & Touche. Many of the people he worked with as clients and co-workers from those days remain friends and colleagues.

A career with purpose

In 1994, he came to St. Luke’s, recruited the previous year by former health system Chief Operating Officer Gary Fletcher and Chuck Pomeroy, St. Luke’s previous chief financial officer. In the interim, he had turned down multiple opportunities with many of the organizations that had been his clients or employers.

If the organization has been a merry-go-round ever since, it has been an extremely fast one. He and colleagues have worked to expand access to care, in part by building out ancillary services. The Magic Valley hospital and the Epic-based common electronic health records system are among other strategic building blocks, added at enormous expense, during his tenure.

In 1994, there were approximately 1,000 employees; when he was named CFO in 2008, there were about 6,000 team members. St. Luke’s currently employs about 17,000 people, with hundreds working in finance and the other shared services areas.

“To go from those early days to where we are today …” Taylor said recently to leaders, becoming emotional and trailing off.

St. Luke’s Chief Operating Officer Sandee Gehrke was a Taylor protégé two decades ago as a finance intern. She teared up when Taylor talked to leaders about his decision.

“You’re the heart of what we do here,” she said. “I just want to thank you for your dedication and your passion and your heart, not just for St. Luke’s but for all of us, as leaders on our own journeys.”

Enron: What not to do

Taylor’s emphasis on relationships and their value threads through all of his dealings. He contrasts the philosophy he has adhered to throughout his career with the trainwreck, attended by secrets and fear, that was Enron; the implosion of that global energy business near the start of the 21st century has over the years become the stuff of books, movies, business school case studies and cautionary tales about the moral slippery slope.

“Everyone needs to be able to look under the covers of this organization,” he said of St. Luke’s. He gives as an example of committed and supportive leadership Robert “Bob” Miller, former chairman of the Albertsons group, who Taylor said knows “It’s not about him. It’s not about him at all.” When companies falter and fail, Taylor said, “They’re not creating a culture of a willing attitude.”

The degree to which Taylor has built loyalty among colleagues and employees, and his concern for relationships, was apparent during the pandemic, when he and the financial team, in collaboration with HR and other departments within St. Luke’s, kept the team whole, even as other health care institutions around the globe struggled with staffing and salaries and a raft of challenges. After the fact, but not during the weeks and months of frantic planning and adjusting, his concerns – and the stress – surfaced.

“Think about all the families and all of you, and everyone who relies on you, all the people reliant upon us,” he said, choking up. “It’s been an honor, and I don’t say that lightly, to be entrusted and given the role I’ve had …”

In the spirit of the Taylor house-raising, though, St. Luke’s CFO credits the team – including community leaders who are connected to the organization through all of the relationships built up over the decades. He includes on his team employees and former St. Luke’s leaders such as Fletcher, John Kee, Ed Dahlberg (“Such strong relationships were built. Ed started St. Luke’s Internal Medicine and that was a significant event.”) and Dr. David Pate.

“It’s a team effort and everyone plays a part in it,” he told St. Luke’s leaders. “Thank you for everything that you’ve given me …

St. Luke’s Jeff Taylor, and a Tennis Lesson from Mom

St. Luke’s Jeff Taylor on How Value Can Drive Innovation in Health Care 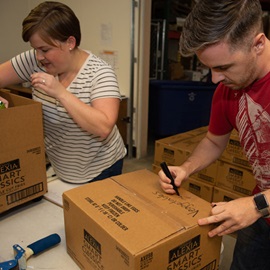