A Legacy of Saving Lives in the Treasure Valley

A colonoscopy is a relatively simple procedure, yet it remains a test many people avoid despite knowing it could save their life. A group of more than 100 golfers in the Treasure Valley aims to change that mindset when they turn out June 1 for the Brian Olson Memorial Golf Tournament. Their goal is to spread the word about the importance of early detection of colon cancer, and this year extra incentive is being offered thanks to BanBury Golf Course.

Brian Olson died in 1999 from colorectal cancer at the age of 39. He left behind a heartbroken wife and two young sons, along with devastated colleagues at Hewlett-Packard. To honor Olson, they joined together to start the tournament, which is now in its 18th year at BanBury Golf Club in Eagle.

The tournament has since raised $465,000 for St. Luke’s Mountain States Tumor Institute, making it one of MSTI’s largest outside fundraisers. Golfers donated another $28,000 this year to help MSTI work to detect colon cancer before it is too late. Donations have also gone to support students at Olson’s alma mater, Pacific Lutheran University in Washington.

Colon cancer is one of the most deadly forms of cancers. In Idaho, 221 people died and 645 were diagnosed with the disease in 2015 (the most recent year for official statistics). Those numbers are trending down for people 50 and older, in large part due to screening. Unfortunately, just 60 percent of adults get the critical test, and even fewer do in Idaho. Our state ranks near the bottom for screening and top for late stage colon cancer diagnosis.

Proceeds from past tournaments paid for more than 25,000 free, at-home colon cancer screening kits distributed around the state. The test detects blood in fecal matter, and is often a first step in determining cancer risk. In addition, 300 colonoscopies were provided to people who otherwise could not afford one. Last year alone, 52 of those had abnormal results, with 116 polyps removed.

“That’s nearly 100 cancers that were prevented in one year in Idaho,” said Dr. Dan Zuckerman, executive medical director for St. Luke’s MSTI. “Most polyps, or growths, have a 70 percent chance of turning into cancer if they’re not removed.”

Only four out of 10 people with colon cancer are ever diagnosed. Dr. Zuckerman says when they finally are, the cancer is not typically found until it has reached stage 4.

“By then, it’s often too late. The majority of stage 4 colon cancers cannot be cured because the cancer spreads to other parts of the body. Yet, when colon cancer is found early, it’s generally easier to treat and you have a greater than 90 percent chance of being cured,” explained Zuckerman.

A colonoscopy is recommended every 10 years starting at age 50 and up to 75, unless you’re at higher risk or have a family health history of colon cancer. In late May, the American Cancer Society announced it recommends screenings begin five years earlier, at 45.

“Initially, we wanted to do something to celebrate Brian’s spirit,” said Rudy Pinon, volunteer event director. “It soon became clear that helping to raise awareness and try and prevent colon cancer was a powerful motivator. The distribution of early detection kits, and providing financial assistance for colonoscopies, makes a tangible difference in preventing this disease from devastating another family.”

Unfortunately, recent studies show an increase in the number of younger adults with colon cancer, like Olson. The Colon Cancer Alliance says one in ten are diagnosed before 50. Of the young survivors, 73 percent were diagnosed at a later stage and 62 percent had no family history of the disease.

Warning signs to watch for and discuss with your doctor include:

Jerry Breaux, a golf pro and director of BanBury Golf Club, hopes to inspire more people to get screened. As incentive, he’s offering a free round of golf to the first 25 people who complete a colonoscopy. They simply need to post a photo on social media as proof showing a portion of the process, using the hashtag #IDColonChallenge, and tagging St. Luke’s Health (@stlukeshealth). Examples include a photo of the prep liquid or a photo while waiting in the doctor’s office before the screening. The photo can be posted on Facebook, Instagram, LinkedIn or Twitter.

More information on colon cancer screening can be found at the St. Luke’s MSTI website. 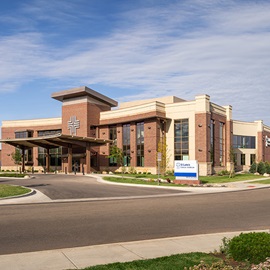