Larry Silva and his prized Dodge Hellcat, the car of his dreams, which he bought after his TAVR procedure last year.
By Dave Southorn, News and Community
February 14, 2022

The motorcycle accident caused some serious pain, but it eventually subsided.

A car accident three years ago broke a few ribs, but didn’t break him.

Even a paragliding accident, which saw him fall about 500 feet onto his back, that would be overcome.

But for Larry Silva, nothing had ongoing effects quite like the open-heart surgery he had in 2011 that included a bypass and repairing an aortic valve.

“I’d been a high adrenaline guy my entire life, got hurt doing more crazy stuff than you can imagine, but the recovery from that open heart is something I had the most terrible difficulties with,” Silva said. “I was told I’d likely need another in 10 years, and it was like staring at the clock on death row.”

Silva, who served as a firefighter for 33 years in San Jose before moving to Idaho 15 years ago, had consistent pains in his ribs and back and leg swelling. His energy was dwindling, he felt, as he describes it, “lifeless.” He even started to give some of his possessions away, dreading what may lie ahead, knowing he did not want to undergo another open-heart operation.

But a meeting with St. Luke’s cardiologist Frederick Costello changed everything.

Dr. Costello suggested a Transcatheter Aortic Valve Replacement (TAVR) procedure. A decade ago, St. Luke’s was the first to introduce the procedure to the area and continues to find great success.

During the procedure, a replacement aortic heart valve is placed in the body via a catheter that is inserted through a small puncture in the leg and threaded up to the heart through the arteries.

“I couldn’t believe what he was saying. I was all on board for that puppy,” Silva said.

On May 21, 2021, Costello performed the TAVR procedure on Silva, who was back on his feet much faster than his 2011 operation.

“As time progressed, I started feeling great again for an old, worn-out man, started getting a good attitude again,” Silva said. “I am still amazed what was done for me, just amazed. As far as I was concerned, I was done. Everything changed.

For the 76-year-old Silva, that has meant less time on the couch and more time helping neighbors with his skills as a mechanic and welder. He’s enjoying the open road, including drives in the car of his dreams, which he bought after the procedure. But he’s not eager to add to the list of his mishaps.

The results of the procedure have not only spurred Silva to enjoy another shot at the life he’s wanted, but to also give some major thanks to those that helped.

A few years ago, Silva had a partial nephrectomy performed by St. Luke’s Dr. Kara Saperston. Last year, after his surgery, Silva made a large donation to the St. Luke’s Foundation in Dr. Costello’s name, but it was also an appreciation for him, Dr. Saperston and all that have helped him lead a healthier, happier life.

“It probably won’t be the last (donation),” Silva said. “I’ve had some very good experiences with St. Luke’s, just excellent.”


Check out the video below, produced by St. Luke's in 2012, featuring one of our first TAVR patients. It also includes an animation outlining the procedure. 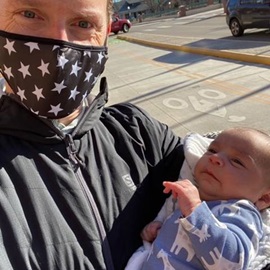