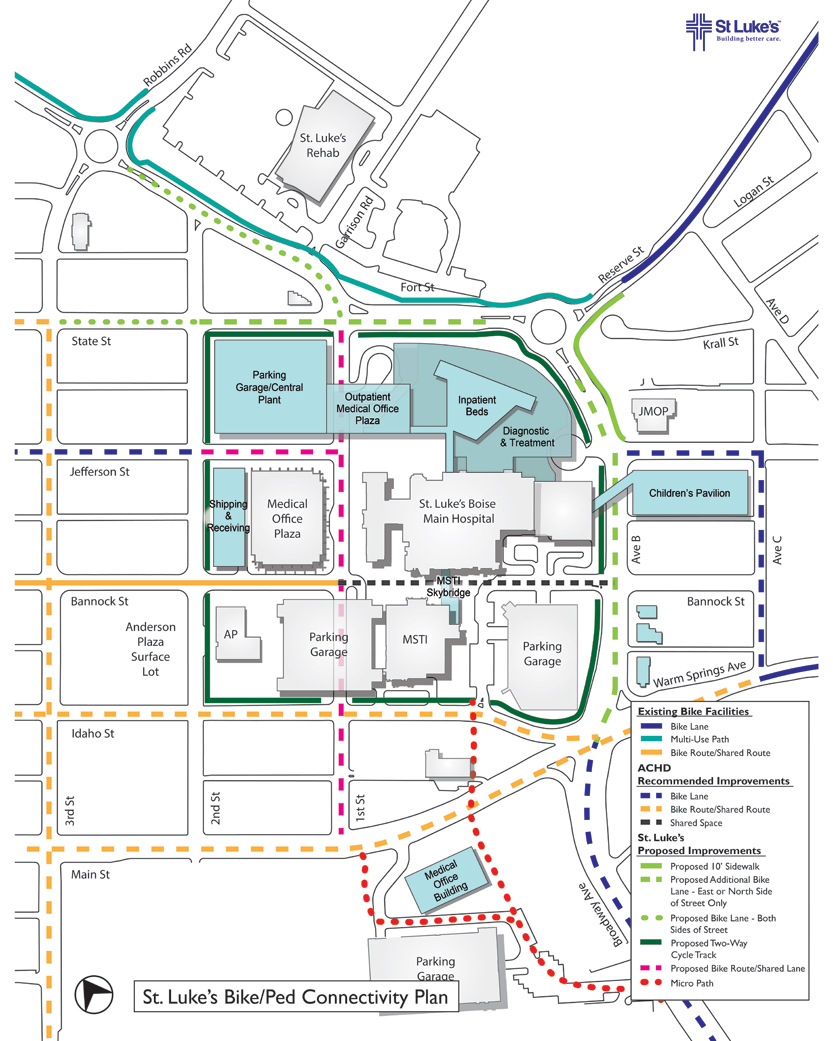 St. Luke’s Master Plan hinges on our ability to close one block of Jefferson Street and use that space to expand the horizontal footprint of the existing hospital. We realize asking the public for the section of Jefferson Street between 1st Street and Avenue B is a significant request, and it’s not one we take lightly.


St. Luke’s thoroughly studied numerous scenarios to build on our current property: to the east, south, west, and north. Ultimately, building on our property to the north of the current hospital is the only practical option to achieve our patient care objectives while maximizing existing infrastructure and minimizing disruptions to current services. Given the significant capital investment the Master Plan requires (estimated cost of $300 million to $400 million), and its goal of providing best-in-class healthcare services for decades to come, St. Luke’s believes it's imperative the plan not compromise on care quality, patient outcomes, or existing best practices in healthcare facility design.


Why must the hospital expand its current footprint horizontally?


As healthcare has evolved, planners and caregivers have learned the benefits of creating convenience and efficiency through horizontally locating care delivery components adjacent to one another. It’s called an Integrated Care Model, and it strives to place the specific physicians, diagnostic and treatment spaces, and equipment in proximity to inpatient rooms. The result is connected care and, most important, better patient outcomes.

The planned organization of our upgraded Boise hospital takes advantage of the Integrated Care Model and aligns our five service lines: heart and vascular, women’s, ortho/neuro, children’s, and cancer. What this means is the new facility will horizontally align inpatient rooms, outpatient physician offices, and diagnostic and treatment components important to each of the service lines to allow physicians and staff to flow between inpatient and outpatient settings. Such a model increases productivity, reduces costs, and offers higher quality of care when the right people are in the right place at the right time.


What does Jefferson Street have to do with it?


The lower floors of the current hospital need to expand across Jefferson Street to allow for that horizontal growth. The key to quality patient care and outcomes begins on the hospital’s first floor, which houses the Emergency Department, and then continues above it with each of the major service lines. The first floor of the hospital is actually 6 feet above street level, making it impossible to expand emergency services without building on top of Jefferson Street (and 6 feet is too low to allow vehicles to pass underneath the expansion). Nevertheless, our design team explored a number of alternative solutions, including tunneling under or raising the street, but neither could be done given the proximity to other intersections. It’s also important to note the hospital has an existing basement and sub-basement that pass underneath Jefferson Street.


The impact of closing one block of Jefferson Street


A comprehensive Traffic Impact Study was conducted as part of our Master Plan process. Detailed traffic counts along Jefferson show that through-traffic vehicular demand for that one-block stretch of road is relatively low. In fact, the vast majority of vehicle traffic (about 85%) is going to or coming from St. Luke’s facilities, or turns off Jefferson at 1st Street when an address on Jefferson isn’t the driver’s destination. The Ada County Highway District counts about 1,500 vehicles a day on Jefferson Street at its intersection with 2nd Street. Of those, only 11-14% use Jefferson as a through street to Avenue B.

Regardless of the traffic counts, St. Luke’s is committed to not just mitigating the impact of the one-block closure of Jefferson Street, but to dramatically improving the safety and efficiency of vehicular, cyclist, and pedestrian traffic throughout the hospital area.

Whereas Jefferson Street is not a popular throughway for drivers, used by about 25 cyclists during rush hour on weekday mornings and another 25 or so on weekday afternoons. We’ve discussed many concepts to address safe, convenient, and efficient bike and pedestrian routes around and through St. Luke’s. We’ve worked closely with our neighbors, the City of Boise, ACHD, and other community members, including cycling advocates, to create the best solutions.


At the heart of our proposed connectivity improvements is a two-way cycle track that would encircle the entire St. Luke’s Boise campus, providing a Greenbelt-like path for cyclists while buffering them from roadways with a landscaped median. Inside of the cycle track would be a new 5-foot pedestrian sidewalk. The cycle track would then allow cyclists to easily connect with 1st, 2nd, Bannock, Fort, State, and Jefferson streets. St. Luke’s also has proposed on-street bike lanes where they don’t currently exist – including northbound along Avenue B, westbound along Fort Street, and bi-directional on State Street.

Intersection realignments, traffic roundabouts, and improved pedestrian and cyclist crossings also are part of our proposal to enhance connectivity in the area surrounding our Boise campus. We'll continue to work closely with ACHD and the City of Boise to ensure our plans help both agencies attain their goals of creating modern, safe connectivity for all forms of transportation.